KUWAIT: The Volunteer Committee of the People of South Saad Al-Abdullah held on Wednesday its third seminar in cooperation with Kuwait Economic Society titled “Housing crisis, challenges and solutions”, in the presence of the housing minister and a number of Kuwaiti personalities. Minister of State for National Assembly Affairs and the Minister of State for Housing and Urban Development Ammar Al-Ajmi stressed the housing issue faces many challenges and will be a crisis for the Kuwaiti family if efforts are not combined to resolve it, indicating that if the current policy continues, implementation processes will be hindered. “Therefore, we must devise new solutions without detracting from citizens’ right to decent housing,” he said.

He added that the South Saad Al-Abdullah City project has six suburbs and contains 24,000 housing units distributed over five suburbs, for which 4,591 vouchers were distributed, indicating that approval was taken from concerned authorities to send a tender for the infrastructure of the city, as the standards and conditions that must be met by the companies are currently being prepared and expected to be completed by Dec 2022.

Head of Kuwait Economic Society Khaled Al-Mutairi said that the society is keen to raise issues of interest for the citizen, and there is no doubt that the challenges of housing are exacerbating, and the legislative and executive authorities must address this crisis and develop appropriate solutions for it.

General Coordinator of the Volunteer Committee of the People of South Saad Al-Abdullah Fahaid Al-Mulhim said the committee exerted strenuous efforts to meet officials and representatives to present the concerns of the people of the city and keep up with the requirements of the city’s completion, calling on Minister Ajmi to develop a clear time plan for offering infrastructure contracts for the city. 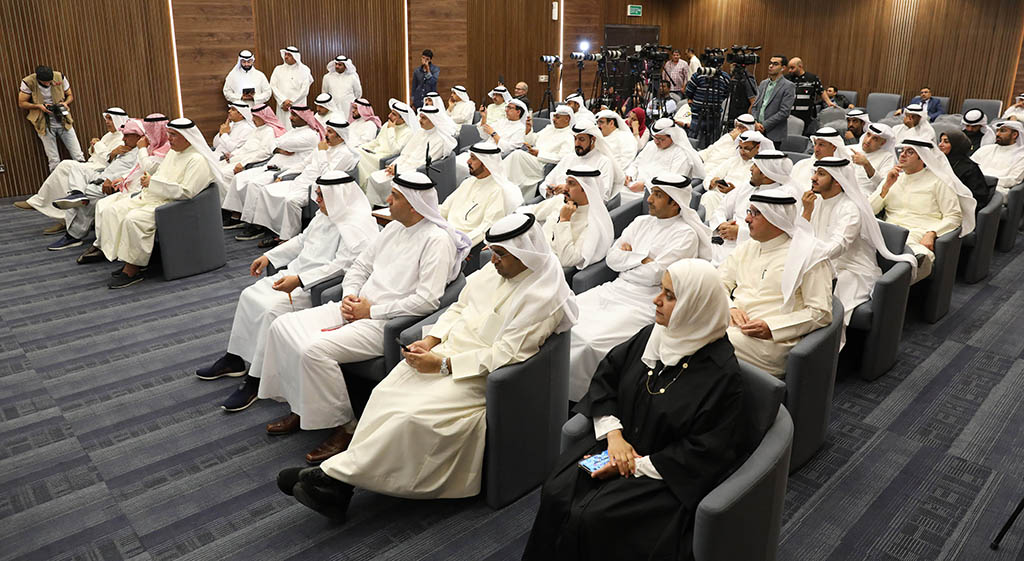 Rapporteur of the Housing Committee in the National Assembly, MP Abdulaziz Al-Saqabi, stressed words are not enough over this issue, and clear practical steps must be taken by the two authorities so that a bold political decision is issued to resolve the housing issue. “We are optimistic about the reform approach that exists in the government and its cooperation to address existing issues, and accordingly there must be an actual decision to implement the proposed solutions,” he said.

Saqabi pointed out the solution to the issue proceeds through three stages, as 90 percent of the treatment of the housing issue is to increase the housing supply in light of increasing housing demand and promote real estate developers.“ But we have had negative experiences with this in Kuwait and the victim is the citizen, so accordingly we sought to establish joint stock companies that would be for the government while the citizen has a share in it, in addition to a share for a strategic partner. Through this company, the real estate developer enters with us for land reclamation,” he said, adding, “We are in the process of finalizing this law, and it will be presented in three weeks.”

Regarding resolving the housing crisis, Saqabi said: “There must be a real estate authority that organizes everything related to real estate to organize the current chaos and follow up and monitor the real estate market in Kuwait and issue reports, statistics, etc, in addition to controlling the chaos in the real estate documentary cycle so that payment of fees, real estate registration, issuance of licenses, etc is not repeated.”

“We tried in the budgets committee to overcome all obstacles to pass the current budget, as everything related to the budget is a precedent with which many projects were stalled,” Head of the Budgets Committee at the National Assembly, MP Adel Al-Damkhi, said, indicating the state does not have priorities in determining budgets. Damkhi pointed out the budget allocated KD 2.5 billion for infrastructure, wondering why it was not used in building new cities.

Chairman of the Priorities Committee in the National Assembly, MP Abdullah Fahad Al-Enezi, said the housing problem is a problem of will and decision, stressing the continuation of obstacles will not contribute to resolving the crisis. He added a lack of transparency has made citizens hesitate in their choices of housing cities.

MP Hamad Al-Obaid said the people’s voluntary committees have a positive role in urging a solution to the housing issue. “The administrative regulations at the Public Authority for Housing Welfare must be developed and the decision to deprive those who received an inheritance of 200 square meters of their right to housing care should be amended. The issue of withdrawing the deceased’s house and not issuing a document must also be overcome. Obstacles in contracting with international companies, delaying distributions and preparing infrastructure must be addressed, along with the Kuwait Credit Bank’s budget problems,” he said.